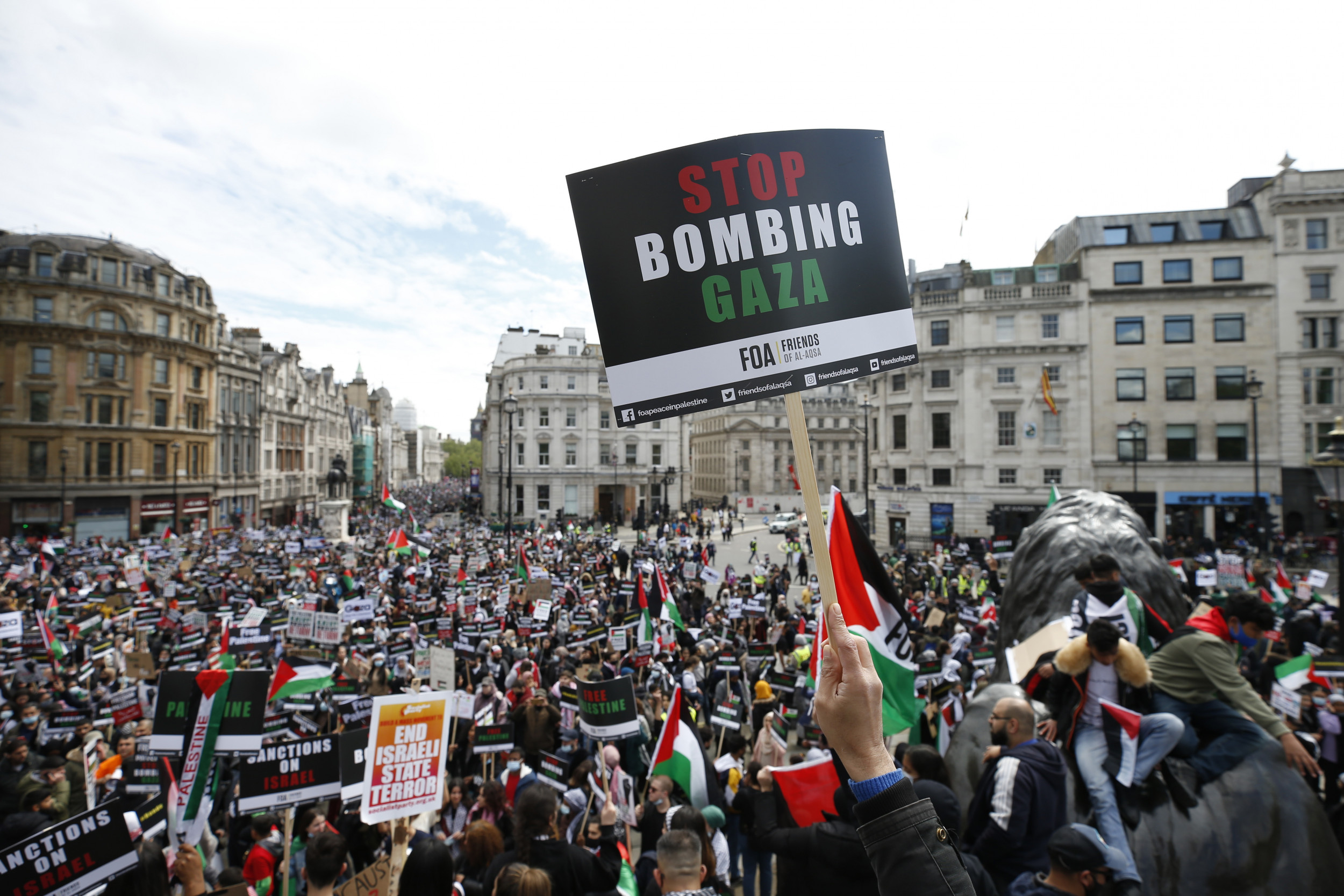 How to understand the red-green axis


The inevitable “offensive tweets of the day” from Ilhan Omar (D-MN) and Rashida Tlaib (D-MI), whether anti-American or anti-Semitic, are only symptoms of the pervasive threat to America and our founding principles which are embodied by the “red-green axis”. The red-green axis of far-left activists and illiberal Islamists remains a baffling and enigmatic phenomenon for many.

Why do the progressives of the twenty-first century, predominantly plagued by “human rights” and “social justice”, find common cause with a doctrinaire religious subset of Muslims who, far from practicing social justice and adhere to human rights, ultimately seek to live in a society governed by sharia – Islamic jurisprudence?

Understanding the link between these two seemingly opposed political movements comes down to identifying their priorities. At first glance, far-left atheism and Islamist religious fanaticism seem to be at odds. But under the veneers of “awakened” rhetoric and political posture, their compatibility emerges.

Basically, their ideological commitments to oppose Western values ​​of free market and individual freedom, and ultimately to replace them with collectivism, is what unites them. Don’t make mistakes. Despite the fact that far-left progressives adopt an avowed secular agenda, their hostility to religion is subordinate to the larger goal of destroying capitalism. We can see their concerns for human rights and fairness fade when it comes to anyone who shares this larger and more important goal.

Those who are supposed to defend feminism and LGBT rights turn a blind eye to the horrific way in which women and the LGBT community are treated by Islamists around the world. More recently, the United Nations released a report exposing the Islamic Republic of Iran’s shocking use of electroconvulsive therapy, hormone injections and potent psychoactive drugs on LGBT children to “cure” their sexuality. Since the Iranian Islamic revolution in 1979, the regime has executed between 4,000 and 6,000 members of the LGBT community.

Iran is far from the only country today that imposes the death penalty on those who engage in same-sex relationships, but American feminists and LGBT activists are silent on Iran, reserving their condemnation only for Israel, which is the only democracy in the Middle East, where women and the LGBT community enjoy more rights than in any neighboring country. In the United States, left-wing cries against transphobia usually boil down to a plea for the use of certain gender pronouns and toilet access policies. Yet they ignore the actual murderous persecution of transgender people in non-Western countries, especially by hard-line Sharia-abiding regimes in North Africa and the Middle East. The fanaticism of low expectations of Muslims around the world and various minority groups nationally reveals their inner core.

Likewise, progressives rightly condemn Nazism and pursue justice against its modern adherents with a fervor that seems noble (although, of course, they too often tarnish their national political opponents by painting with a brush that is far too broad). Yet it is the geopolitical allies of the far left who are among Hitler’s greatest admirers. The Palestinian darlings of the left, whose violent actions they excuse, tending to infantilize them as victims of Western influence, are often taught in their mosques, on state television and in their schools to praise many of the leading anti-Semites of the last century. Mein Kampf, of course, is also translated into arabic.

Haj Amin al-Husseini, the spiritual leader of the Palestinians in the 20th century, was known to have collaborated with the Nazis, helped expel native Jews, turned back WWII refugees fleeing to Palestine, and formed a Bosnian Muslim division of the SS. More recently, Nation of Islam leader Louis Farrakhan, adored by Black Lives Matter leaders and former leaders of the Women’s March, infamously called Hitler a “very great man” (amid a litany of consistently gruesome anti-Semitic comments) .

In the same spirit of hypocrisy, the global community of Islamists has made the fight against “Islamophobia” a famous cause. Yet they are all too often strangely silent about the genocide of Uyghur Muslims by Communist China, the hundreds of thousands of Muslims massacred in Syria under the regime of Bashar al-Assad or the Islamist destruction by Recep Tayyip Erdogan of freedoms and democratic institutions of Turkey.

But perhaps the funniest manifestation of the cognitive dissonance of far-left progressives and Islamists is their shared obsession with “settler colonialism,” which they see as the preeminent manifestation of pure evil in the world. Non-profit organizations and entire academic departments are committed to “decolonizing” our institutions. Their agitprop speaks of Christian crusaders, European imperialists and American neoconservatives, but they will never say a word about the Ottoman Empire or the historically brutal Arab conquests. On the contrary, these communities sometimes support some of the most repressive regimes, past and contemporary, from Mao to Maduro.

Pressed on this point, the two groups cancel all the atrocities committed under such draconian regimes, claiming that they are only victims of white or Western influence. The 45 million deaths during the years of Mao Zedong’s “Great Leap Forward” do not prevent Patrisse Khan-Cullors, leader of Black Lives Matter, a self-proclaimed Marxist, from quoting Mao as providing “a new understanding of what to do with it. what could our savings look like ”. And while these movements openly express their opposition to sanctions against the Islamist theocracy in Iran, they vehemently advocate for sanctions against the liberal state of Israel.

What these inconsistencies reveal is that reactionary Islamists and so-called “progressives” maintain a purely utilitarian and transactional relationship. They use each other to foment social unrest under the virtuous pretext of fighting transphobia, Islamophobia or other social “injustices”, perverting the very definition of “justice” along the way. In short, Islamists and leftists are perfectly happy to form tactical alliances against common enemies they inflate in order to advance their strategic goal of ending capitalism, free speech and individual rights.

My family escaped this well-known synergy in Syria and across the Middle East, where Arabist parties like the Baath of the Assads or Saddam Hussein worked transparently with Islamists like al-Qaeda, Hamas, ISIS, the Muslim Brotherhood and the Taliban. Their alliances were tumultuous, strewn with spasms of conflict when they came to power. But the synergy is repeated from nation to nation.

Nowhere is synergy exemplified better than at the United Nations. States like Venezuela, China, Syria, Qatar and Iran control the UN agenda. They form a red-green global axis that goes hand in hand with Western liberal democracies and devotes most of its collective efforts to Israel, the only liberal democracy in the Middle East. Is. Omar, Tlaib and their progressive allies did try to import this UN agenda into Congress.

Whether through a socialist revolution or jihad, wherever there is a successful formula for democracy, there will be movements aimed at demolishing it. It’s up to those of us who value the freedom to put an end to it.

Mr. Zuhdi Jasser is a senior fellow for the Center for Security Policy. He is the founder and president of the American Islamic Forum for Democracy, based in Phoenix, Arizona, and the co-founder of the Muslim Reform Movement. He is a former lieutenant commander of the United States Navy and former vice chairman of the United States Commission on International Religious Freedom. He is the author of the book, A battle for the soul of Islam: the fight of an American patriot to save his faith. He is also a doctor in private practice. Find him on Twitter: @DrZuhdiJasser.

The opinions expressed in this article are those of the author.