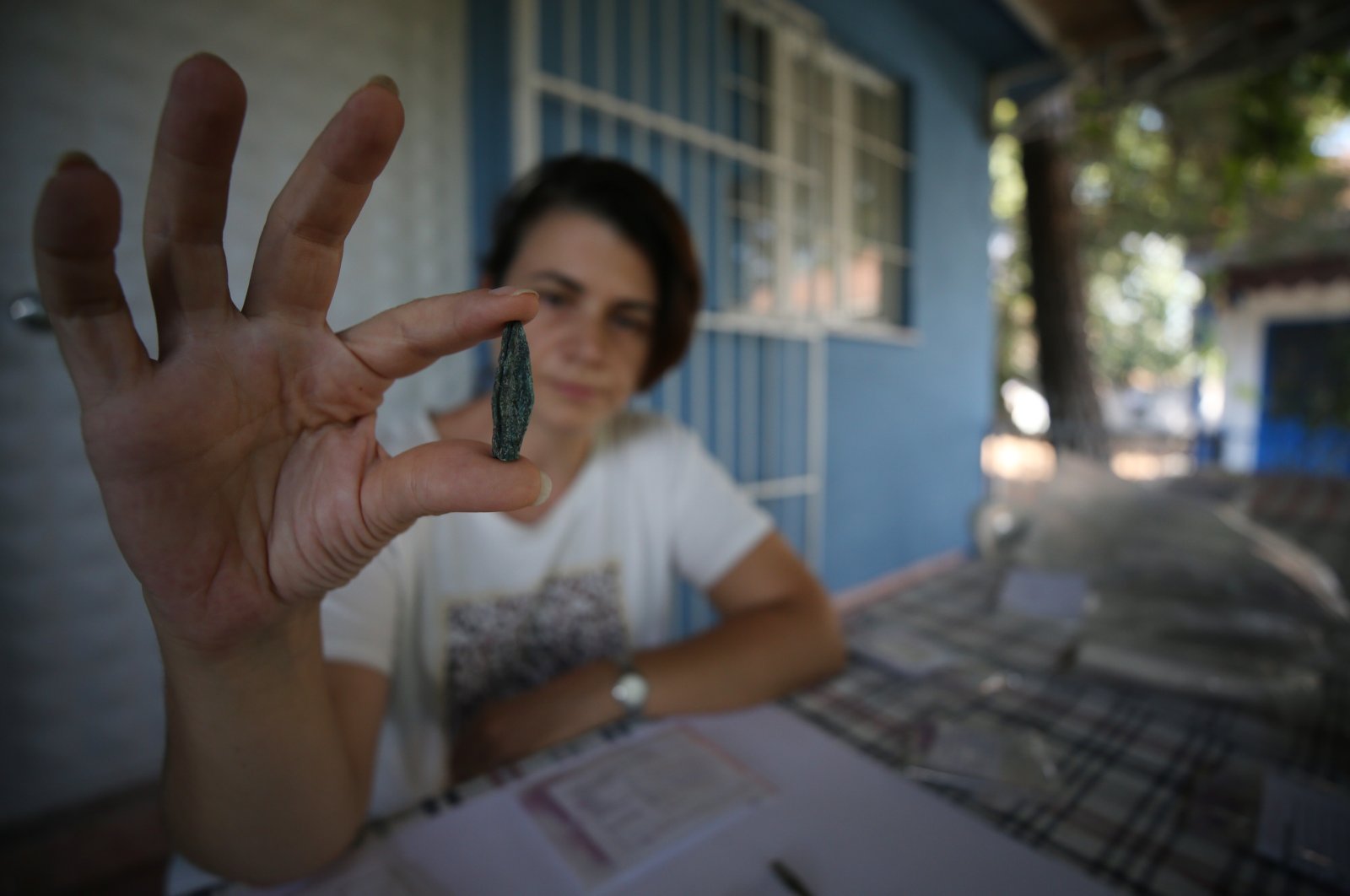 Arrowheads discovered in the ancient town of Daskyleion, located in Bandırma District, Western Balıkesir Province, provide important data on the history of war and hunting in the region.

Begun in 1954 and interrupted several times, excavations continue at Daskyleion, where the first settlements date back to 3000 BC. About 500 bronze and iron arrowheads have been found at Daskyleion in 35 years of these archaeological studies.

Arrowheads give clues to their intended use with their structure – for example, some of them are formed with two or three wings – and their size.

Working on the metal weapons found in the city, Özgün Kasar, professor in the archeology department at Muğla Sıtkı Koçman University, told the Anadolu Agency (AA) that the bronze arrowheads found at Daskyleion were shank arrows while iron arrowheads were used by attaching them to their handles.

Kasar said he unearthed 93 arrowheads in a tomb during the 2012 excavation, “We believe they are related to the warrior character of one of the people in the tomb. “

Noting that they found other weapons such as daggers during their excavations, he said metal armor scales used by soldiers to protect themselves from arrows were also among the finds.

Archaeologists working in the area have dated the scales of armor to different centuries. “This armor was generally used in Daskyleion in the Middle Ages. However, there are also earlier examples. We know that rectangular armor scales were used in the 6th century BC,” Kasar said.

Shape according to intended use

Kasar also explained that they knew Daskyleion was a garden used by the Persians for hunting.

Referring to the function of arrowheads, Kasar continued, “These arrows must have been used in wars. We can see deformations on the arrowheads, such as fractures and twists in the tips. probably also used for hunting.

Kasar also pointed out that the datable arrowheads found in the ancient city belong to the years when the Persians ruled the area.

Expressing that the different shapes of arrowheads are related to their functions and effects, Kasar added, “If two-winged arrowheads had broad wings, maybe they would have been used to pierce skin. Most of the time, sharp three-winged arrowheads were used to pierce armor. It can be said that their shape, weight and size are certainly related to their intended use and that these arrowheads were used both in warfare and hunting. We had the arrowheads analyzed, which revealed heavy use of lead. It can be said that the use of lead increased durability and weight, which also improved the penetrating force. We do not yet have any solid data indicating that arrowheads were produced here, but we can say that different metal findings may have been produced at Daskyleion. “

Located on the shores of Lake Manyas, the ancient city of Daskyleion bears the traces of many civilizations that ruled Anatolia. In the 7th century BC, the famous Lydian king Daskylos came to the city of Sardis, the capital of the ancient kingdom of Lydia, due to dynastic quarrels.

Daskylos’ son Gyges was born in Daskyleion, and he was later called back to Lydia. After he became king of Lydia, the city was named Daskyleion – the place of Daskylos – around 650 BC.

Due to the natural beauty and strong geopolitical position of the area, Daskyleion was established south of the lake. When Alexander the Great decided to eliminate the Persians in 334 BC.

Prior to Alexander the Great, various states attached importance to both the political and economic control and administration of Thrace, the Straits, the Sea of ​​Marmara and the Phrygian regions due to the importance of their geopolitical position in Anatolia and therefore protected Daskyleion as an active fortress. at each period. Due to this value, Daskyleion was carefully rebuilt by the Phrygians, Lydias, Achaemenids, Macedonians and even the Byzantines as a strong fortress, and its economy was kept at a high standard. In addition, it was run by famous administrators.