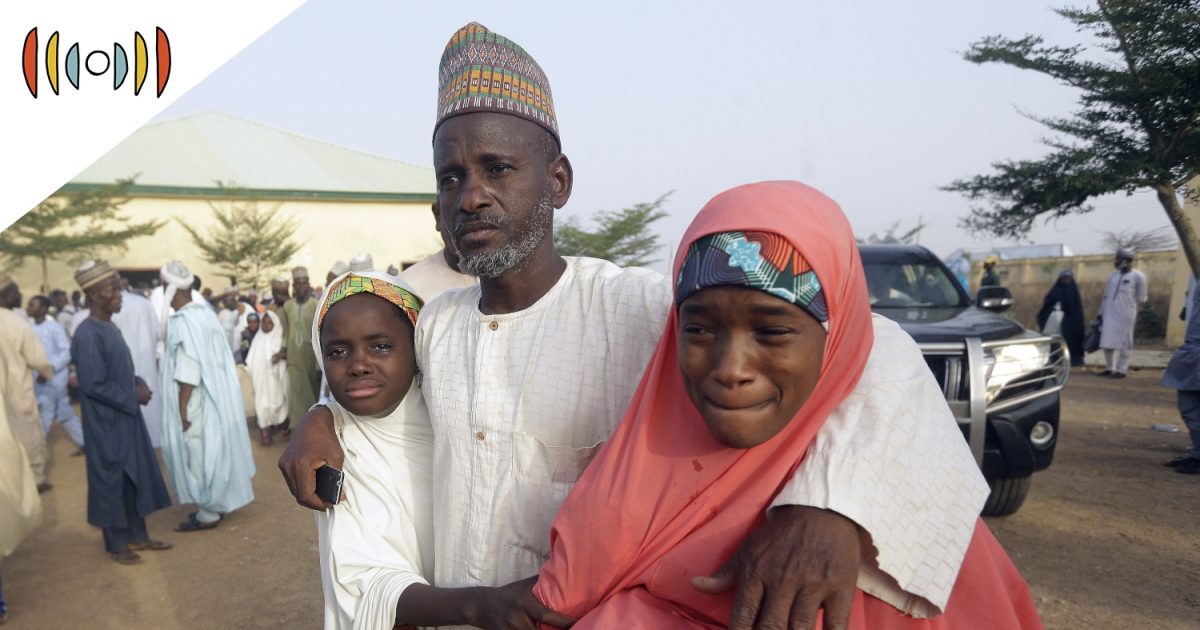 Around the world – Kidnapping in Nigeria


MARY REICHARD, HOST: Coming on The world and all in it: World tour with our reporter in Africa, Onize Ohikere.

Fourteen students kidnapped in April from a university in northwest Nigeria were reunited with their families on Saturday. Their captors released them after 40 days.

The kidnappers took 19 students away during the raid on the school. They executed five of them a few days later and demanded ransom for the others. The government did not say whether it had paid the ransom.

Kidnapping for ransom is increasingly common in parts of Nigeria. On Sunday, armed men abducted dozens of children from an Islamic seminary in the north-central part of the country. It was the fifth such attack since December.

Calls for a peaceful transition in Mali– West African leaders met in Ghana on Saturday to call for peace in Mali.

AUDIO: I urge your Excellencies to remain committed to supporting the Malian people to find a peaceful solution and restore democracy and stability in the country.

But last week, soldiers arrested the transitional president and the prime minister. They released them after several days, saying they had agreed to resign.

The Economic Community of West African States suspended Mali from its bloc after Saturday’s meeting. He called on the military to immediately put in place a new civilian government.

Investigation reveals mass grave in Canada– Then we go to North America.

Canada hoisted its flags at half mast on Monday following the discovery of a mass grave in a public school for indigenous children.

The tomb contained the bodies of 215 children.

Lua Mondor is a member of the First Nations tribe.

MONDOR: It’s certainly no surprise, everyone in the First Nations community knew there are mass graves, we’ve been calling it for years, we’ve been telling the government for years that it’s been mass graves in every boarding school, but they didn’t listen to us.

The school in British Columbia was the largest of more than 100 residential schools established at the end of the 19th century. They were designed to assimilate indigenous children into Western culture.

Tribal advocates have long claimed that abuse and neglect were rife in schools, some of which operated until the 1970s.

Protests against COVID in Brazil– Next to South America.

Tens of thousands of people in Brazil staged another day of protest against President Jair Bolsonaro on Saturday. Ten thousand people marched through the streets of Rio de Janeiro. Organizers held similar rallies in other major cities.

They are angry with his handling of the COVID-19 pandemic. The virus has killed nearly half a million people in the country.

Critics say Bolsonaro has not done enough to stop the spread of the virus. And they blame him for the slow deployment of the vaccine. Lawmakers are investigating Bolsonaro’s handling of the pandemic.

A giant tortoise discovered in Ecuador– And finally, we end today in Ecuador.

Authorities have confirmed that a giant tortoise found in the Galapagos Islands is a species considered extinct a century ago.

Danny Rueda is the Director of the Galapagos National Park. He said genetic testing confirmed the species of the turtle found in 2019. Scientists at Yale University compared the turtle’s DNA to a sample taken in 1906.

The island’s national park is home to around 60,000 turtles of various species.

It’s this week’s world tour. Reporting for WORLD, I am Onize Ohikere in Abuja, Nigeria.

WORLD Radio transcriptions are created in the shortest possible time. This text may not be in its final form and may be updated or revised in the future. Accuracy and availability may vary. The authoritative recording of WORLD Radio’s programming is the audio recording.

Sinovac: WHO approves Chinese vaccine against Covid-19 CoronaVac for emergency use

Silo Wellness Partners with Mushe Inc. to Establish the First